The little island in the North Atlantic Ocean has made the world news a couple of times in the last years due to its magnificent eruptions. Being located between two moving tectonic plates, the North American plate and the Eurasian plate, makes Iceland an ideal location for frequent earthquakes and eruptions. Another reason for these amazing events is that Iceland is directly on top of a hot spot which is also the reason why the island is above sea level. 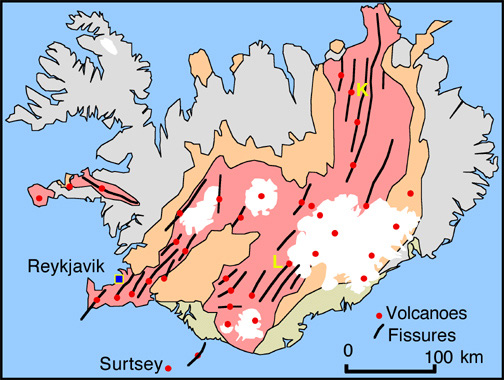 Here are the most famous eruptions in Iceland since the year 2000.

What better way to start this blog then by talking about the queen of the Icelandic volcanos, Hekla.

Mt. Hekla is 1.491 meters high and is one of the most active and prominent volcanos in Iceland. Since the middle ages Hekla has been thought to be “the gateway to hell“ in Europe. The first historic eruption in Hekla was in the year 1104 shortly after the Vikings first came to Iceland which made our queen famous in Europe. This eruption was the biggest one in Hekla after the settlement and many farms were in ruins afterwards.

The latest eruption in Hekla was in February back in the year 2000 and lasted for 10 days. This was a small but beautiful eruption and many Icelanders drove to the highlands to catch a glimpse of the flowing lava. Since 1970 Hekla has erupted every 10 years or so but the queen has kept us waiting for 17 years now and all signs indicate that she is ready to explode at any time. 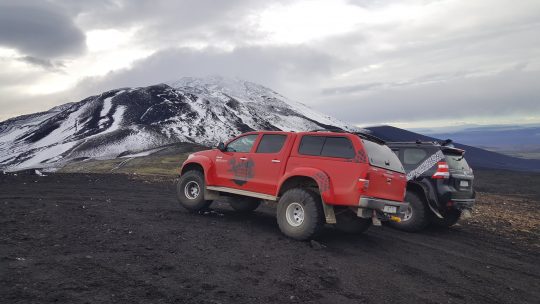 The eruption in Fimmvörðuháls started right before midnight on the 20th of March and lasted for almost a month. The location was right right in between two glaciers, at the east end of the glacier Eyjafjallajökull and the west end of Mýrdalsjökull. The lava from this eruption formed a 200 meter-high lava ’’water’’-fall and many Icelanders drove up to the highlands to enjoy the view.

The UK Top Gear team immediately showed great interest in the eruption and it was decided that James May would come to Iceland and that Top Gear along with Arctic Trucks would make a story based on one of the original North Pole AT38 Hilux.

On the way up to the volcano, the weather turned for the worse with snow drifts and winds up to 30 meters per second, resulting in zero visibility. That did not stop the expedition and using GPS to navigate, the expedition pushed ahead. When the team came closer the eruption site, the weather cleared, unfolding a magnificent view of the volcano, spewing glowing lava.

After the eruption, the two craters that had formed were given the names Magni og Móði in tribute to the sons of Thor, the Norse god of thunder. 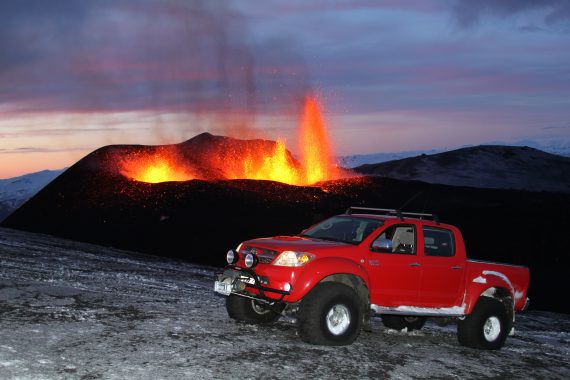 The eruption in Eyjafjallajökull the glacier started one day after the eruption in Fimmvörðuháls ended, the 14th of May and lasted for over a month. This eruption didn’t go by unnoticed to the rest of the world as it caused all flight traffic to shut down when the volcanic ash spread all around the continent of Europe.

This eruption marks the beginning of the tourism explosion in Iceland and one can say that it was a blessing for the economy in the hard times the financial crisis brought to Iceland. The lava burst through a crater at the top of the glacier, right above the popular sightseeing spot at Gígjökull glacier outlet. That resulted in a large flood along with dramatic change in the landscape in Thorsmork Valley.

Iceland’s most recent eruption started back in 2014 in the north of the biggest glacier found on the island, Vatnajökull. Until then this area was seldom visited by travelers as it is very remote and not so sought after. This summer day, the 28th of August, a small eruption started in Holuhraun which only lasted for couple of hours but then led to an eruption a lot bigger. Two days later a fissure opened up with a bang and reached its peak on the first day with a fissure around 1500 meters long. The lava field grew quickly and ended up being more than 83km2 and was around eight times larger than the eruption in Eyjafjallajökull in 2010.

The highlands around the glacier Vatnajökull were closed off to public traffic due to dangerous chemicals that followed the eruption and it spread out fast with the wind. Every media strove to bring the latest news to the public which kept the crowd thirsty for more information. No one was allowed in the area close to the eruption so the photos in the media was all that people saw.

It wasn’t until the end of February the next year, 6 months later, that the eruption subsided. The large newly formed lava field was given the same name as its predecessor, Holuhraun. 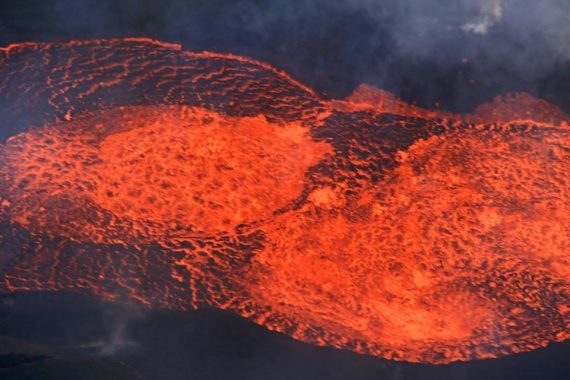